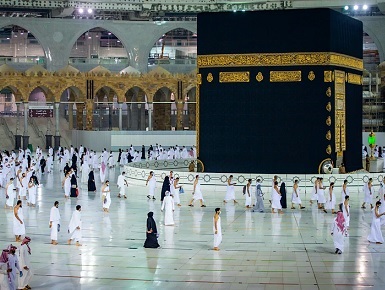 The First Ten Days of Dhul Hijjah will begin on Sunday 11th July 2021, with the day of Arafah falling on Monday 19th of July and Eid celebrated on Tuesday 20th of July Insha’Allah. Eid prayer timings will be 6am, 7am, 8am, 9am, 10am and 11am. All are welcome. Community safety regulations for indoor crowded settings will apply, please make Wudhu at home, bring a face mask and a shoe bag. The entire ground floor if for sisters only use, entrance is via Brownlow Road. Wishing you all a happy and safe Eid Mubarak!

Please attend the centre during prayer times to arrange your Qurbani, or visit the UKIM central office website to organise your Qurbani online at www.ukim.org

The 10 Days of Virtue

As related in Al-Bukhari, Ibn ‘Abbas says about the verse of Al Qur’an, ‘Remember Allah (swt) during the well known days,’ that it refers to the first ten days of Dhul-Hijjah.

Ibn al-Zubayr, Mujahid and others of the earlier and later generations also said that this refers to the first ten days of Dhul-Hijjah. Ibn Kathir said in his Tafsir (commentary) that this is the correct opinion.

Praise be to Allah (swt) who has created Time and has made some times better than others, some months and days and nights better than others, when rewards are multiplied many times, as a mercy towards His slaves. This encourages them to do more righteous deeds and makes them more eager to worship Him, so that the Muslim renews his efforts to gain a greater share of reward, prepare himself for death and supply himself in readiness for the Day of Judgment.

This season of worship brings many benefits, such as the opportunity to correct ones faults and make up for any shortcomings or anything that one might have missed. Every one of these special occasions involves some kind of worship through which the slaves may draw closer to Allah (swt), and some kind of blessing though which Allah (swt) bestows His favour and mercy upon whomsoever He will. The happy person is the one who makes the most of these special months, days and hours and draws nearer to his Lord during these times through acts of worship and goodness; they will most likely be touched by the blessing of Allah (swt) and will feel the joy of knowing that they are safe from the difficulties of the Hereafter.

Ahmad and at-Tabarani record from Ibn ‘Umar that the Messenger of Allah (peace be upon him) said, ‘There is no day more honorable in Allah (swt)’s sight and no acts more beloved therein to Allah (swt) than those in these ten days. So say tahlil (There is no deity worthy of worship but Allah: La ilaha ill Allah), takbir (Allah is the greatest: Allahu Akbar) and tahmid (All praise is due to Allah: Alhumdulillah) a lot during those days.’ [Reported by Ahmad]

Abu Hurairah relates that the Messenger of Allah (peace be upon him) said, ‘There are no days more loved to Allah (swt) for you to worship Him therein than the ten days of Dhul Hijjah. Fasting any day during it is equivalent to fasting one year and to offer salatul tahajjud (late-night prayer) during one of its nights is like performing the late night prayer on the night of power. [Lailatul Qadr].’ [Related by at-Tirmidhi, Ibn Majah]

Narrated Ibn ‘Umar: On the Day of Nahr (10th of Dhul-Hijjah), the Messenger (pbuh) stood in between the Jamrat during his Hajj which he performed (as in the previous Hadith) and said, ‘This is the greatest Day (10th of Dhul-Hijjah).’ The Messenger (pbuh) started saying repeatedly, ‘O Allah! Be Witness (I have conveyed Your Message).’ He then bade the people farewell. The people said, ‘This is Hajjat-al-Wada.’ [Bukhari]

In what follows, we will highlight some of the Sunnah regarding these days, hoping by this to provide an incentive to make the best out of them and gain Allah (swt)’s reward, Insha’Allah.

One of the wives of the Prophet, peace is upon him said: ‘Allah (swt)’s Messenger used to fast the (first) nine days of Dhul Hijjah, the day of ‘Ashura’, and three days of each month. [Sahih Sunan Abi Dawud]

Fasting on all these days, however, is not a Wajib (compulsory), nor is it a constant Sunnah that the Messenger, peace be upon him, never dropped.

Fasting the Day of Arafat

The Day of Arafah, is Tthe best day of the whole year, the day of Arafah is the day when the pilgrims stand in worship on the Mountain of ‘Arafah.

The Prophet (pbuh) said ‘There is no day on which Allah (swt) frees people from the Fire as He does no the day of Arafah. He comes close (to those standing on ‘Arafah) and then revels before His angels, saying: ‘What are these people seeking?’ [Muslim]

Hafsah reported, ‘There are five things that the Messenger (pbuh) never abandoned: fasting the day of ‘Ashura, fasting the [first] 10 [days of Dhul-Hijjah], fasting 3 days of every month and praying two Rak’ah before the dawn prayer.’ [Related by Ahmad]

‘Uqbah ibn ‘Amr reported that the Messenger of Allah (peace be upon him) said, ‘The day of Arafah, the day of sacrifice, and the days of Tashriq are Eids for us–the people of Islam–and they are days of eating and drinking.’ [Muslim]

Abu Hurairah stated, ‘The Messenger of Allah (peace be upon him) forbade fasting on the day of Arafah for one who is actually at Arafah.’ [Related in Ahmad, Abu Dawud and Ibn Majah]

At-Tirmidhi commented that he scholars prefer that the day of Arafah be fasted unless one is actually at Arafah.

It is Sunnah to say Takbir, ‘Allahu Akbar’, Tahmid ‘Al-hamdu Lillah’, Tahlil ‘La ilaha ill-Allah’ and Tasbih ‘Subhan Allah’ during the first ten days of Dhul-Hijjah, and to say it loudly yet respectfully in the mosque, the home, the street and every place where it is permitted to remember Allah (swt) and mention His name out loud, as an act of worship and as a proclamation of the greatness of Allah (swt), may He be exalted. Men should recite these phrases out loud, and women should recite them quietly.

‘That they might witness things that are of benefit to them (i.e., reward of Hajj in the Hereafter, and also some worldly gain from trade, etc) and mention the name of Allah (swt) on appointed days, over the beast of cattle that He has provided for them (for sacrifice)…’ [Noble Qur’an 22:28]

Takbir at this time is an aspect of the Sunnah that has been forgotten, especially during the early part of this period, so much so that one hardly ever hears Takbir, except from a few people. This Takbir should be pronounced so it is audible and rspectful, in order to revive the Sunnah and as a reminder to the negligent. There is sound evidence that Ibn Umar and Abu Hurairah (ra) used to go out in the marketplace during the first ten days of Dhul-Hijjah, reciting Takbir, and the people would recite Takbir when they heard them.

The tenth of Dhul-Hijjah is Eid Al-Adha or the day of an-Nahr (slaughtering). It marks the conclusion of the major rites of Hajj, and commemorates Allah (swt)’s bounty on His Messenger Ibrahim (as), when He gave him a ram to sacrifice as ransom for his son Isma’il peace be upon them both.

The Prophet (pbuh) said ‘The day of al-Fitr, the day of an-Nahr, and the days of Tashriq are Eid days for us Muslims. They are days of eating and drinking.’ [Related in Ahmad, an-Nasa’i]

On these days, the pilgrims complete their rites, Muslims continue with their Eid celebrations, and are prohibited to fast.

Allah (swt) mentioned the sacrifice together with the first and foremost worship in Islam: prayer. This is a clear indication of its great importance. Thus He ordered His Messenger (pbuh), to slaughter sacrifices by saying:

Abu Hurairah reported that the Messenger, peace be upon him, said: ‘He who has the capacity, and does not sacrifice, may not approach our Musalla (place of prayer – on the ‘Eid).’ [Related in Ibn Majah, Ahmad]

Regarding this Hadith, Imam ash-Shaukani said, that prohibiting the one who could afford to sacrifice, but did not do so, from approaching the Musalla indicates that he must have left off a Wajib, as it becomes useless to offer the Salah without this Wajib.

The one who plans to sacrifice such as the head of household, is prohibited to cut his hair or nails from the first Dhul Hijjah until he offers the sacrifice. The Prophet (pbuh) said ‘For the one who has a slaughtering to perform (on ‘Eid then, once the Hilal (crescent) of Dhul Hijjah is observed, let him not cut any of his hair or nails until he sacrifices.’ And in another narration: ‘Once the ten days start, for those of you who have the intention to sacrifice, let them not cut any of their hair or nails (until they sacrifice).’ [Muslim]

This prohibition is the opinion of the majority of the scholars of the early generations of Muslims. And Allah (swt) knows best.